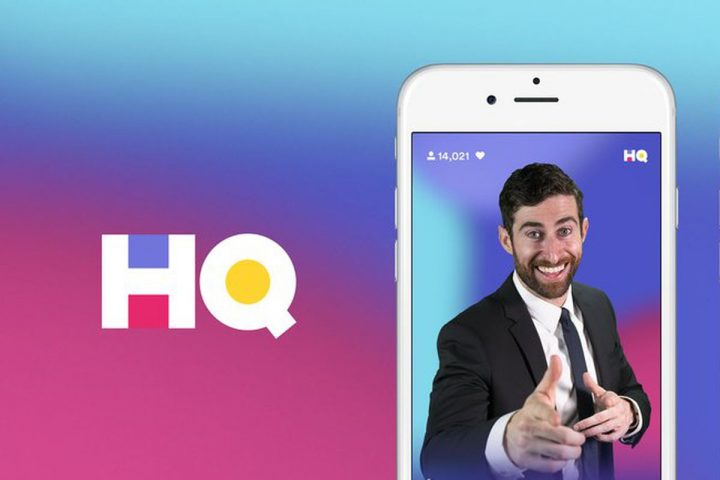 It appears the popular quiz game app HQ is done. Word is the company laid off the final 25 staff members and will cease operations. HQ had a deal in the works to keep them open and acquired, but the buyer pulled out at the last minute and aren’t willing to fund. That means dunzo. HQ Trivia is shutting down.

It’s sad, but not surprising. I remember a few years ago when the game came online to a fervor of the players who were just finding out about it. I remember there were games on at 6:00, that was about 2 minutes after I got off the air at the TV station. So many nights, I’d log in while walking across the parking lot to my car. I’d see that my wife, brother and sister-in-laws were online. It was truly appointment quiz time. Sadly, I’d lose by the time I hit my first intersection (driving and playing HQ is not recommended).

Launched in October 2017, HQ Trivia was a 12-question live video trivia game started by two of the former Vine founders. Users could win real money by answering all the questions and not being eliminated in multiple daily games. HQ Trivia had raised more than $15 million, including a Series A led by Founders Fund. At one point it had more than 2.3 million concurrent players. That started to deteriorate.

I only won a time or two and probably earned about $1.20 or so (I want my money!). It’s not surprising because I didn’t see how the model could sustain. To pay out each and every day, several times per day was going to be a monumental challenge in finding sponsors and advertisers. They pulled it off for awhile. But slowly, the apps popularity dwindled.

Why HQ Trivia is shutting down

CEO and co-founder Rus Yusupov said in a statement attained by CNN Business’ Kerry Flynn about the last minute fallout of the deal: 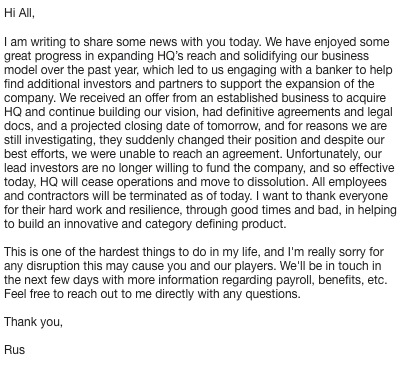 With HQ we showed the world the future of TV. We didn’t get to where we hoped but we did stretch the world’s imagination for what’s possible on our smartphones. Thanks to everyone who helped build this and thanks for playing.

Sadly, the novelty began to wear off. Cheaters came in, splitting the prize money down to just a few dollars or cents per winner. Copycats emerged internationally. Engineering issues led users to get kicked out of the game. Tragedy struck. Co-founder Colin Kroll passed away. That caused bigger problems at HQ Trivia. Development was slow, leading users to grow tired of the game. New game types and viral features materialized too late.

But I’ll always remember my walks across the parking lot playing HQ Trivia. I thought it would take off to epic proportions. And it did, somewhat. But in the end, it just shows you how even the best ideas can die like the rest of them.